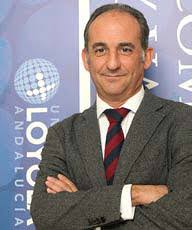 Gabriel Maria Perez Alcala, Ph.D., is the President of Universidad Loyola Andalucia in Andalucia, Spain, but it is not simply for his excellence in this administrative role that he is awarded the Magis Medal.  Dr. Alcala Perez lives as a lay collaborator in the mission of the Society of Jesus.  Since 2011, when he was the founding president of Universidad Loyola Andalucia, he has thought of the university as a proyecto social, that is, a university in solidarity with the marginalized, committed to finding solutions to the deepest issues of the southern Spain region.  He has inspired a university focused on issues aligned with the Universal Apostolic Preferences, ensuring that main research lines of the university address economic and environmental justice.

Dr. Alcala Perez is a model of Ignatian leadership. He employs Ignatian discernment in his decision making and teaches the university community that living cura personalis makes the community stronger.  He shares his spiritual richness when accompanying young people in their vocational journey.

Under his inspiration and leadership Universidad Loyola founded the first ASN chapter in Europe, recognizing that an ASN chapter will promote the Jesuit mission and values of the university, and its members would inspire other students to live the ASN values.  He leads the continuing collaboration with ASN for the promotion of the honor society in Europe and worldwide, and uses his platform at Loyola to encourage engagement in the global Catholic and Jesuit networks.

In his Magis Medal nomination, Dr. Alcala Perez’s leadership of Universidad Loyola was called “the salt and the light” (Matthew 5:13-16) bringing hope to the young people of the region while showing by his actions that Loyola’s programs and initiatives are always to give greater glory to God.

Dr. Perez holds a Ph.D in economics from the University of Córdoba, and in addition to his duties as president, teaches economics.