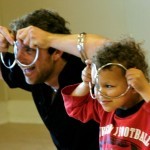 Ryan Bart is known today as The Magic Man. During a year as a Fulbright Scholar in Bogota, Colombia, he established a Magicians Without Borders (MWB) Project collaborating with Bella Flor, an NGO working with children in the poorest slum of Bogata. There, Mr. Bart runs the Magic Club to train children to become magicians. They learn important personal skills such as: self-confidence, self-esteem, focus, discipline, practice, personal power and presence through standing up and performing. He also performs in local hospitals, orphanages, and centers for street children, and teaches English at the University of Colombia. Mr. Bart’s mission, and that of MWB, is to entertain, educate, and empower the forgotten children of the world to dream of a better life and have the self-confidence to make their dreams come true.  Students in Colombia, recently performed at TedX CESA in Colombia and received an enduring standing ovation. Since his Fulbright, he spent several months in India teaching magic to daughters of commercial sex workers from the brutal brothels of Mumbai. While an undergrad, Mr. Bart combined his abilities as a magician and desire to become a physician by volunteering at Sacred Heart Children’s Hospital. There, he learned about the healing power of magic.   Often, parents pulled him aside to tell him that his magic made their child smile or laugh for the first time in days or even weeks.  He is about to begin his second year of medical school at Western University of Health Sciences in Southern California. 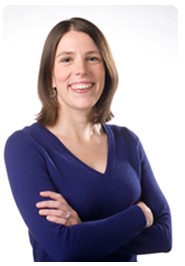 Julie Frye is Deputy Director for Finance & Strategy at the Bill & Melinda Gates Foundation where she brings financing solutions to challenges within the global health sector. She says of her role at the Bill & Melinda Gates Foundation, “I’m so fortunate to have found work that so explicitly combines my passion and my skills.”  Right now Julie is focused on people’s access to higher quality, low cost medicines in Africa.  “We in the U.S. can’t imagine getting terrible diseases like malaria.  Imagine the complications of struggling to afford the medicine you need without any guarantee that what you just bought isn’t counterfeit.  On average, a child dies every minute from this terrible disease, and there is much we can do.” Ms. Frye is a CPA with degrees in Accounting and Finance from Gonzaga University. She attributes her experience at the Casa de la Solidaridad in El Salvador while a student at Gonzaga and her Jesuit Volunteer work in Nicaragua partnering with a community-based microfinance program, as instrumental in her future career with the philanthropic foundation.  Ms. Frye also serves as treasurer on the Board of the Northwest Immigrant Rights Project. 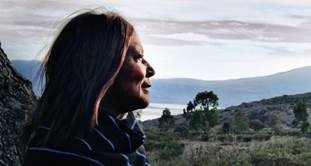 Connie Davis’s career in international public health began when she joined the World Health Organization (WHO) campaign to eradicate smallpox in India in 1975, just weeks after completing her residency in pediatrics at the USC---Los Angeles County Hospital. Her first challenge was navigating her role as the only solo female traveling physician in rural India. Ms. Davis traveled with her eradication team by jeep to isolated villages. If a smallpox case was found, the team would start immediate containment efforts, vaccinating every single person within a one km radius and then searching for rash and fever cases in villages within 10 km. Ms. Davis’s other projects and accomplishments in public health vary from working with UNICEF, helping to raise Senegal’s childhood immunization rate from 40 percent to 80 percent in two years, to presenting research to the Dalai Lama on injecting drug use causing HIV/AIDS in Tibetan youth and helping the Tibetan Ministry of Health to develop a prevention and control program for HIV/AIDS.  Dr. Davis eventually went on to work with the Centers for Disease Control in Atlanta on dengue fever control along the US border with Mexico, working with Cambodian refugees in Thailand, and aiding Ethiopian refugees in Somalia. 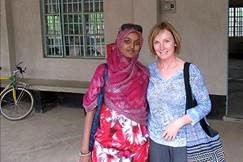 Dr. Mary McFarland is former dean of the Gonzaga University School of Professional Studies and the co-founder and International Director for Jesuit Commons: Higher Education at the Margins. The program is an outgrowth of the 35th General Congregation, where the imperative was to reach out “to the margins” to educate a secular world. In her role, she is responsible for implementation of the vision and mission of JC:HEM, working closely with Jesuit Refugee Service (JRS) and university partners to ensure those at the margins have access to Jesuit higher education. She says access to higher education “is not a community problem, it’s a world problem.” McFarland focuses on preparing community leaders and tomorrow’s educators through higher education. The program leverages the global Jesuit network to bring Jesuit education to the world’s poorest people and empower those to eradicate poverty. Dr. McFarland coordinates an extensive effort. Through online tools, accredited university courses are available to refugees and other at the margins with little, if any, access to postsecondary education. JRS and other partners provide on-site coordination, tutoring, and cultural expertise. Regis University awards the Diploma in Liberal Studies, several Jesuit Universities award certificate credentials, Georgetown provides the SIS and LMS, and Gonzaga University provides office space and direct financial support.  Over 130 faculty have taught courses for JC:HEM, many of who volunteer their time.