Bob Betterton is the founder of Rochester Urban Homesteaders, Inc. The not-for-profit corporation,  a partnership with Le Moyne College, engaged alumni in local community service. The purpose of the organization was to move working poor families in the City of Rochester out of rental squalor and into affordable home ownership. The group acquired “toxic assets” and assisted working poor families to rehabilitate abandoned houses into safe, comfortable homes with long-term mortgages at low fixed rates. Volunteers with a wide range of skill sets worked together to run the organization, and Le Moyne alumni get first priority. Mr. Betterton brought together alumni with different backgrounds -- from attorneys and accountants to construction and city planning professionals. Mr. Betterton is interested in Catholic Church issues and has written two books on the subject.  He has also authored a book about his wife's fifteen year battle with Alzheimer's.  He currently publishes a monthly newsletter associated with the organization he founded, Accelerating Catholic Church Reform.  This fall, ACCR will be fundi two faculty research projects on the USCCB (US Conference of Catholic Bishops) at LeMoyne College. 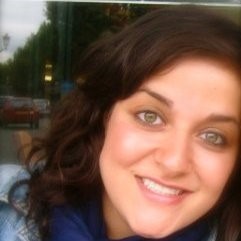 From first female Dolphy Day Wizard to international exchange guru, Lena Adely has had an adventurous road since graduating from Le Moyne College in 2006.  Ms. Adely is currently the Assistant Director of International Admissions for Manhattanville College. In her role, she is responsible for recruiting international freshman, armed forces and visiting students. Her travels after graduation have brought her to 22 countries and included a two-year move to Spain to teach English.  Prior to her role at Manhattanville College, she worked with numerous international exchange programs, including Program of Academic Exchange (PAX), Future Leaders Exchange (FLEX), and the Kennedy-Lugar Youth Exchange and Study (YES) Program. At YES, Ms. Adely had the opportunity to work with high school students from countries with significant Muslim populations to spend an exchange year studying in the U.S. The program was a response to 9/11 and allowed Ms. Adely an opportunity to connect with her Jordanian heritage. “My background is Arab and Middle Eastern, so I really have a special place in my heart for the Middle East. This program brings these deserving students from countries where they otherwise may not have the opportunity to come to the United States to study,” she explained. Ms. Adely described her work fostering understanding and peace among international youth as her “dream job.”

Ms. Clyburn began her career with the Red Cross in 1969 as a Hospital Field Director during the Vietnam War.  Since then, she has been involved in 46 disaster relief operations that have taken her to nearly every state. She has served in numerous leadership roles, both as a paid Red Cross staffer and as a volunteer.  Most notably, in 2001, immediately after the terrorist attacks, Ms. Clyburn was named Director of the Disaster Operations Center in charge of providing relief to those affected by the attacks. In taking on this monumental role, she became the first person of color to have served as a Level 5 Disaster Director, the highest level within the Red Cross System. Ms. Clyburn was the first African American student to attend her Catholic high school and among the first to attend Le Moyne College. During college, she participated in the Civil Rights Movement, traveling to Louisiana for Freedom Summer in 1968. Throughout her career, Ms. Clyburn moved back and forth between volunteer work and paid positions with the Red Cross. In her retirement, Ms. Clyburn remains an active volunteer focusing on seismic preparedness and safety. She also volunteers with a local theater, the National Civil Rights Museum, and her parish.