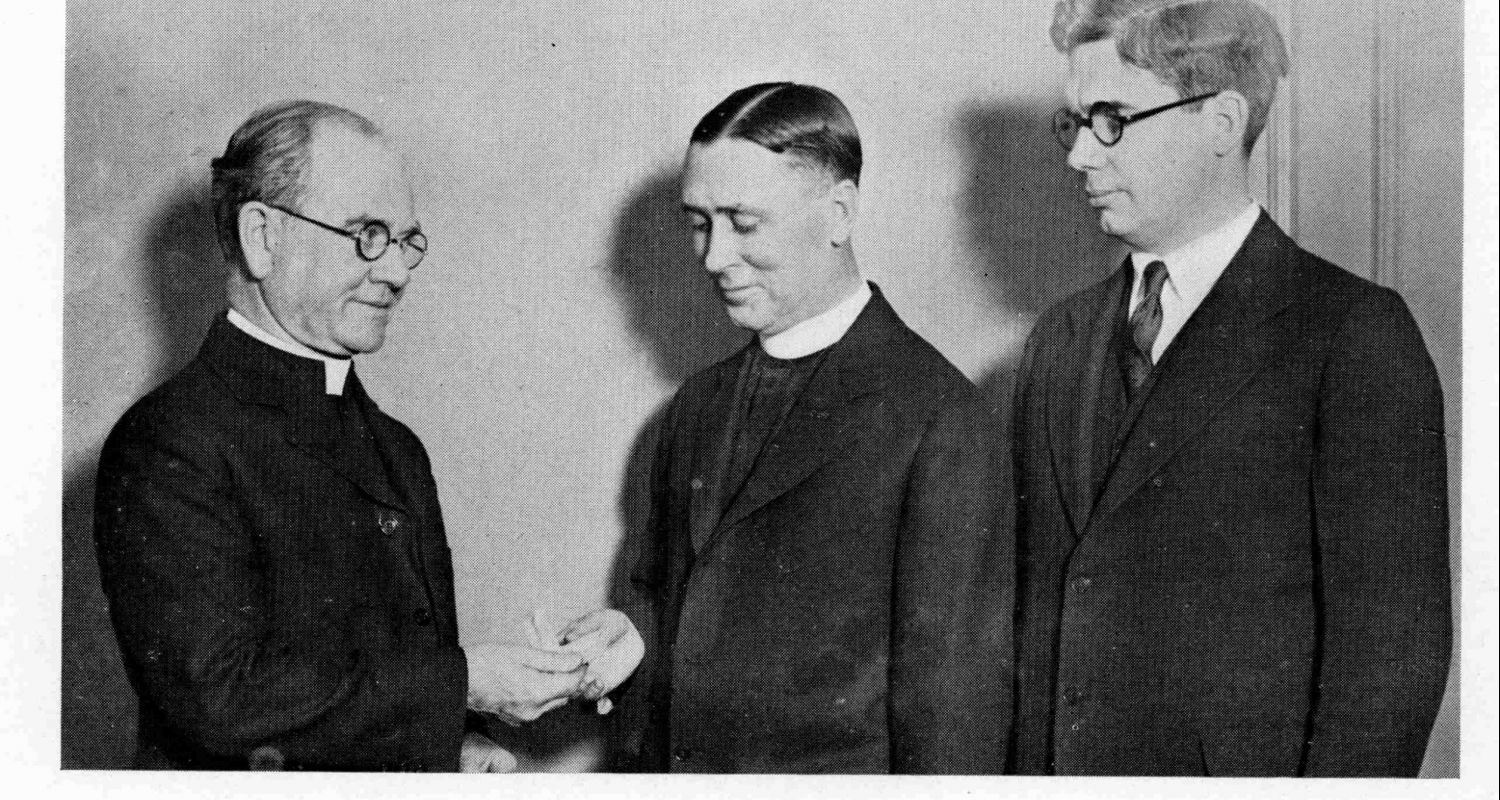 On June 4, 1915, Alpha Sigma Nu founder, John Danihy, SJ, Dean of Journalism at Marquette University, held the inaugural induction of 11 undergraduate men, founding the Society.  A dynamic leader, he established the Marquette Press, the Marquette Tribune, and the yearbook, the Hilltop. In his travels and reading, Fr. Danihy had encountered and admired honor societies, though in the first half of the 20th century, students at Catholic institutions of higher education were systematically locked out of traditional honor societies.

Fr. Danihy believed these newly inducted men exemplified a dedication to scholarship, loyalty to the cause of Jesuit education, and service to their campuses, and instructed them "to band together those who most fully understand and appreciate the ideals of a Jesuit education and to impress these ideals upon their fellow men.”  With much anticipation that the society would spread to other schools, in 1921, Fr. Danihy announced that his vision for the Society went beyond the walls of Marquette towards the creation of a national Jesuit organization.

The first national convention of Alpha Sigma Nu was held in 1925, where the first Board of Directors was elected. The Constitution was passed, calling for the President of each university or college to appoint a member of the Society of Jesus as Faculty Adviser to its Alpha Sigma Nu Chapter.

The first induction of Gamma Pi Epsilon, the Jesuit honor society for women also founded at Marquette, occurred on April 6, 1925. Gamma Pi Epsilon became a national organization in 1947 when Saint Louis University granted permission to organize a chapter on campus.

From the first, Alpha Sigma Nu encouraged the creation of Alumni Cubs to help foster continued loyalty and service to Jesuit education. The 1940 Convention brought about the creation of a newsletter to help tie the suddenly far-flung organization together and in recognition that Alpha Sigma Nu would need a well-developed alumni base if it were to keep growing.

By 1943, the Society had grown to 19 chapters and was moving into the new decade with its mission as the vanguard of Jesuit action and ideals.

Membership in Alpha Sigma Nu has never been restricted to members of the Catholic Church. The Society's leaders strove to keep the organization open to anyone who was qualified to enroll in a Jesuit institution.

The 1960’s saw great growth in the Society despite the student unrest on many American campuses. The next Convention and the 50th anniversary of Alpha Sigma Nu took place during the 1965-66 academic year. This event celebrated the continuing legacy of Jesuit education in America and recognized the Society, which honored the best of that tradition. Father General Pedro Arrupe, SJ, in his keynote address, expressed a desire for the laity to become more involved in Church issues and saw Alpha Sigma Nu as an ideal group for this purpose. He said the profile of the Jesuit-educated graduate was a person with "a balance of intellectual humility and independence" who "respects the traditions and accomplishments of the past but is open to new ideas and developments.” “This is an historical evening for you and me,” he said, celebrating fifty years.  “I looked forward to being with you to show my respect for your achievements of the past but more especially to join with you in charting the future.”

At the 1964 conference, the issues committee reasoned: "If ΑΣΝ is to honor students desirous of said honor, no one should be eliminated on grounds of sex. The present set-up contradicts the notion of Jesuit honor students.” Thus, the two Jesuit honor societies merged and the Boards of Alpha Sigma Nu and Gamma Pi Epsilon met for the first time in March of 1972. Here you see the merger resolution:

"BE IT RESOLVED: That Gamma Pi Epsilon and Alpha Sigma Nu be, and hereby are, merged into one honor society known as Alpha Sigma Nu to continue to advance the causes, traditions and purposes that have been fostered and promoted for many decades by both societies.  That fall, Alpha Sigma Nu inducted a total of 1,140 new members into its organization: 663 men and 477 women. The numbers dramatized the strength of the new organization." 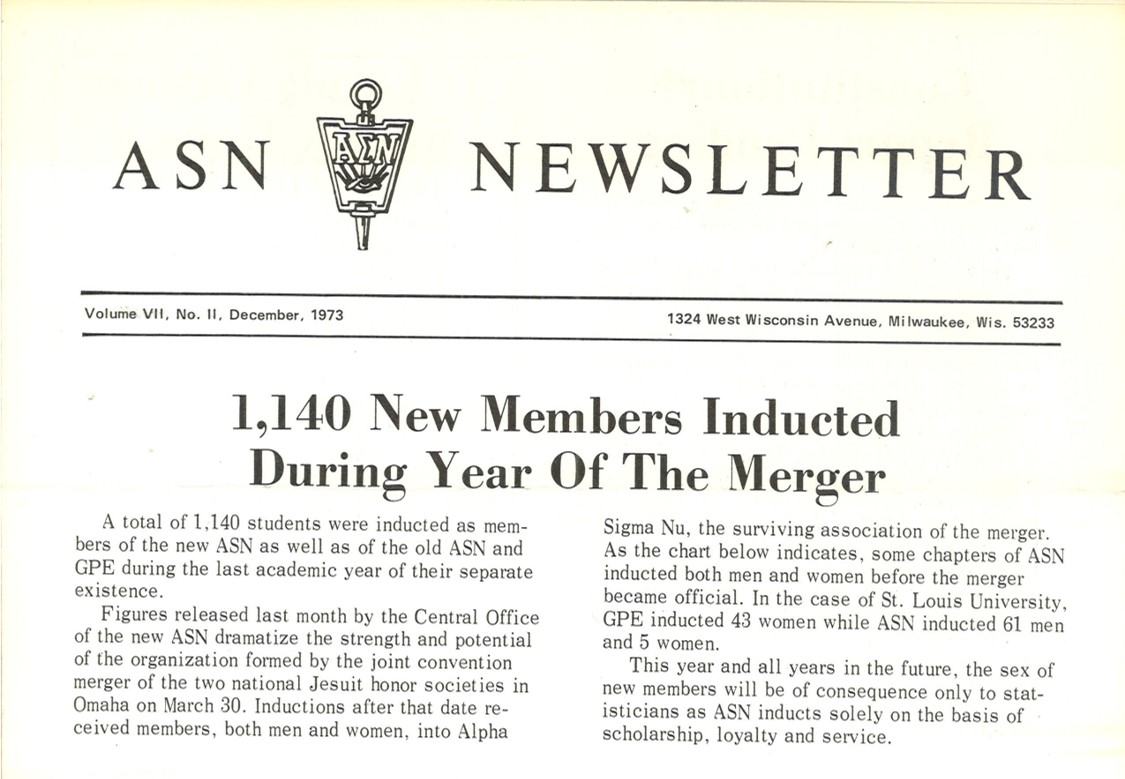 In 1975, Alpha Sigma Nu joined the Association of College Honor Societies. ACHS is an organization that certifies honor societies, assuring they meet standards and providing students a place to check the legitimacy of honor societies who invite their membership.

The board passed in 1979 the bylaw mandating that two members of the board be student members elected at each Triennial Conference. In 1980, the Board founded the Alpha Sigma Nu Book Awards, now given in a 3-year cycle, honoring books in the following categories: the Humanities, Professional Studies, and the Sciences. The Book Awards promote excellence in research and scholarship among faculty and staff at Jesuit institutions of higher education and are one of the hallmarks of Alpha Sigma Nu's commitment to honor scholars of Jesuit institutions.

In 1981, the AΣΝ Scholarship Program began with Board approval of a $1,500 annual scholarship at Marquette University. Our scholarship program now funds $1,000 scholarships at all our member institutions and is funded by the donations of Alpha Sigma Nu alumni to our annual Sustaining Fund.

2008 - Record numbers. 1,694 new inductees across our member institutions, over $184,000 donated to our Sustaining Fund by AΣΝ alumni, and 14 Alumni Clubs actively encouraged scholarship, loyalty and service in the lives of our alumni

2008, 2011 and 2014 - Alpha Sigma Nu Faculty Advisers gather to discuss the mission and vision of the organization

2016 - Loyola Andalucia, with campuses in Seville and Cordoba, is our first Chapter in Europe and the first Spanish-speaking Chapter

Some 450 years ago, Ignatius Loyola began an order that stressed all Christians should strive for excellence in service to all humanity, all for the greater glory and honor of God. Alpha Sigma Nu, in seeking the best of Jesuit education, requires that its now 90,000+ members emulate St. Ignatius through excellence in scholarship, loyalty, and service. This Ignatian heritage is relevant today as Alpha Sigma Nu looks to its second century of honoring students of excellence.