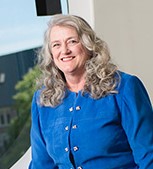 Janet Lee has lived a life of service since her Peace Corps tour in Ethiopia after her graduation from Regis College i­­­­­n 1974. Since returning to Regis University as a librarian in 1982 and serving as the Dean of Library since 2012, she has melded her professional passion for libraries and literacy in serving underserved populations locally and internationally, most specifically returning to her adopted home of Ethiopia on several occasions to assist in library development and literacy training with an emphasis on first language publishing.

While on sabbatical in 2010 in Mekelle, Ethiopia, she helped establish the Segenat Children and Youth Library, a fully functioning children’s library with an online catalog, reference services, and audio-visual resources. This brought her to the attention of the Ethiopian Community Development Council, which had an even more expansive library project in the historical town of Axum, known for its stelae, rock-hewn churches, and the Ark of the Covenant.  After being awarded a coveted Fulbright Scholar award, she spent ten months in Axum (2017-18), dividing her time between the University of Aksum and the Axumite Heritage Foundation Library, where she assisted with cataloging the extensive collection and setting up a Chromebook Lab that provided access to open access text books, content-rich databases, and the Ethiopian Ministry of Education-approved curriculum.

An advocate for publishing children’s books in first languages, or mother tongues, she has assisted in delivering workshops in cloth book publishing (where the medium is pieces of cloth rather than paper) and in collaboration with the African Storybook project, an open access publishing platform where books may be translated into multiple African languages, downloaded, or printed for distribution.  From these workshops, seven books in Ethiopian languages were selected and published on the platform, providing children with attractive books in their own languages.

Locally, under her direction, the Regis University Library has sponsored Arrupe Jesuit High School students as part of Arrupe’s Corporate Work-Study program.  Janet worked with the local ASN chapter in setting up an online catalog for the library of the dual-language Escuela de Guadalupe, a K-5 elementary school.  She is currently the co-editor of Jesuit Higher Education: A Journal, an open access peer-reviewed journal with a focus on development, advancement, and critique of higher education in the Jesuit tradition.  She has published and presented extensively on library and literacy issues related to first language publishing and library development as it relates to Ethiopia, Africa, the developing world, and Arrupe Jesuit High School.