Chapter of the Year Award Winner(s) 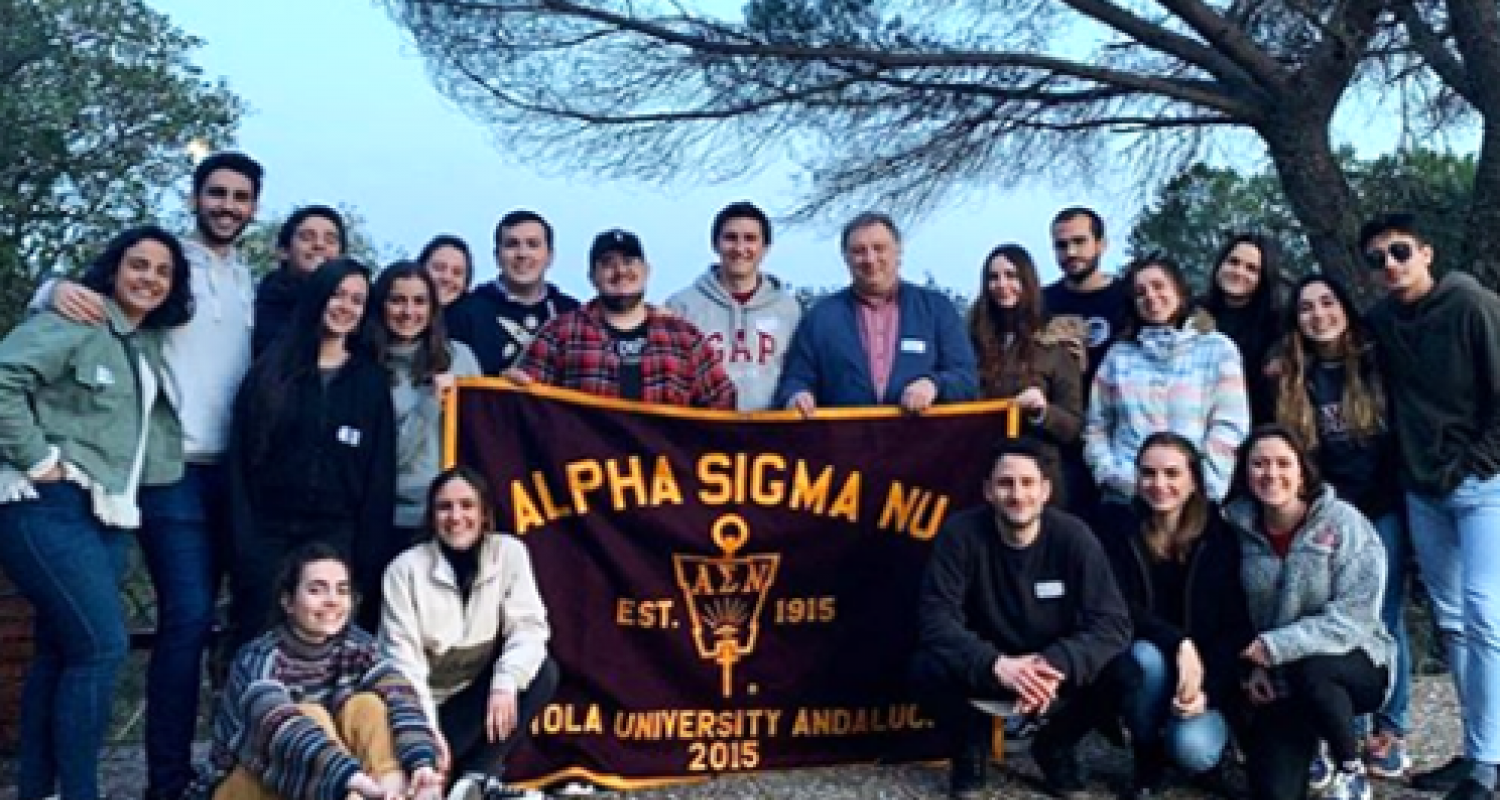 This year, in line with a need for adaptability, Alpha Sigma Nu has reimagined the Chapter of the Year award. Student chapters have been hard at work designing programming that embodies the tenets of scholarship, loyalty, and service and have been innovative and organized in managing their executive boards and student members. It is only fitting that the Chapter of the Year award recognize those chapters who created extraordinary programming, adding value to Alpha Sigma Nu membership. Each winning chapter will receive a cash prize for next year's chapter programming and an award plaque. Though an award ceremony typically takes place on campus, this year, once again, we needed a new strategy. Since students can be found most days on Instagram, Kate Gaertner used Instagram Live to make a live announcement of this year's winners. This format was well-received by chapter leaders and could be a great model moving forward! If you missed it, you can find the announcement on ASN's Instagram page www.instagram.com/alphasigmanu.

Five awards honor outstanding work by our chapters this year. We congratulate all the winning chapters and their leaders!

OVERALL CHAPTER OF THE YEAR 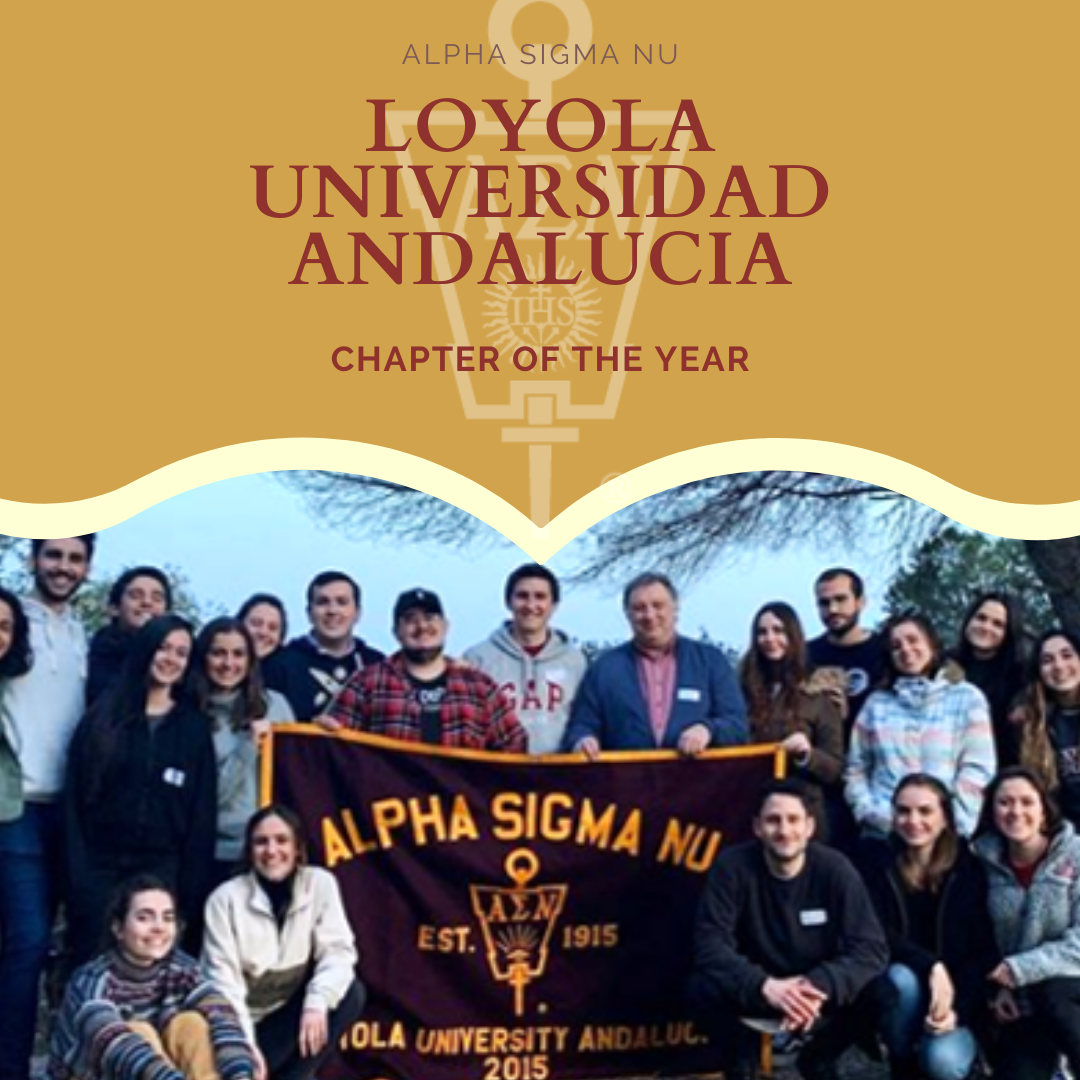 This 2020 overall Chapter of the Year is Loyola University Andalucia. This chapter owes much of its success to the incredible chapter management capabilities of its President Elena Perez (Loyola Andalucia `19) and her executive board, along with Adviser Pedro Pablo Perez (Loyola Andalucia `16). The university is divided between two campuses, one in Cordoba and one in Seville. The executive team was likewise divided between campuses but kept as their motto, "Two campuses, one chapter." Each event was executed on both campuses or hosted as a combined event at a separate location. The e-board met virtually weekly, kept in close contact via WhatsApp, and maintained Trello boards for individual program management. In addition, Elena never missed the monthly Chapter Presidents Zoom meeting, despite them running at an inconvenient time for our Spanish chapter.

The chapter at Loyola Andalucia hosted or collaborated on 11 service projects, numerous talks and round tables, an innovative mentoring program, and a full-chapter weekend retreat. A main goal of this chapter has been increasing campus awareness of Alpha Sigma Nu, a topic the entire Society is tackling on a larger scale. This team had a full list of tactics, including their weekly ASN Tapas events, which invited any campus member to an informal get together to discuss global issues as well as what Alpha Sigma Nu is, along with the well-executed social media strategy, and multiple underclassmen meetings all added to the success of this branding campaign. The mentoring program, mentioned earlier, also aided in this branding campaign. ASN members, who are upperclassmen by nature, were paired with underclassmen at Loyola to help guide them through the college experience. This partnership served as a great service experience and testament to the idea of Cura Personalis. It also increases awareness of ASN with freshman and sophomores.

Loyola Andalucia not only managed their chapter expertly and put on a long list of mission-driven and innovative programming, but they also celebrated ASN Day on October 17th with such creative spirit and pride in the Jesuit honor society. Their social media posts and tabling events across two campuses engaged many students, faculty, and even the Rector (President) of the university. We thank this team, and indeed the entire chapter, for their endless passion for ASN and the Jesuit ideals of our society. 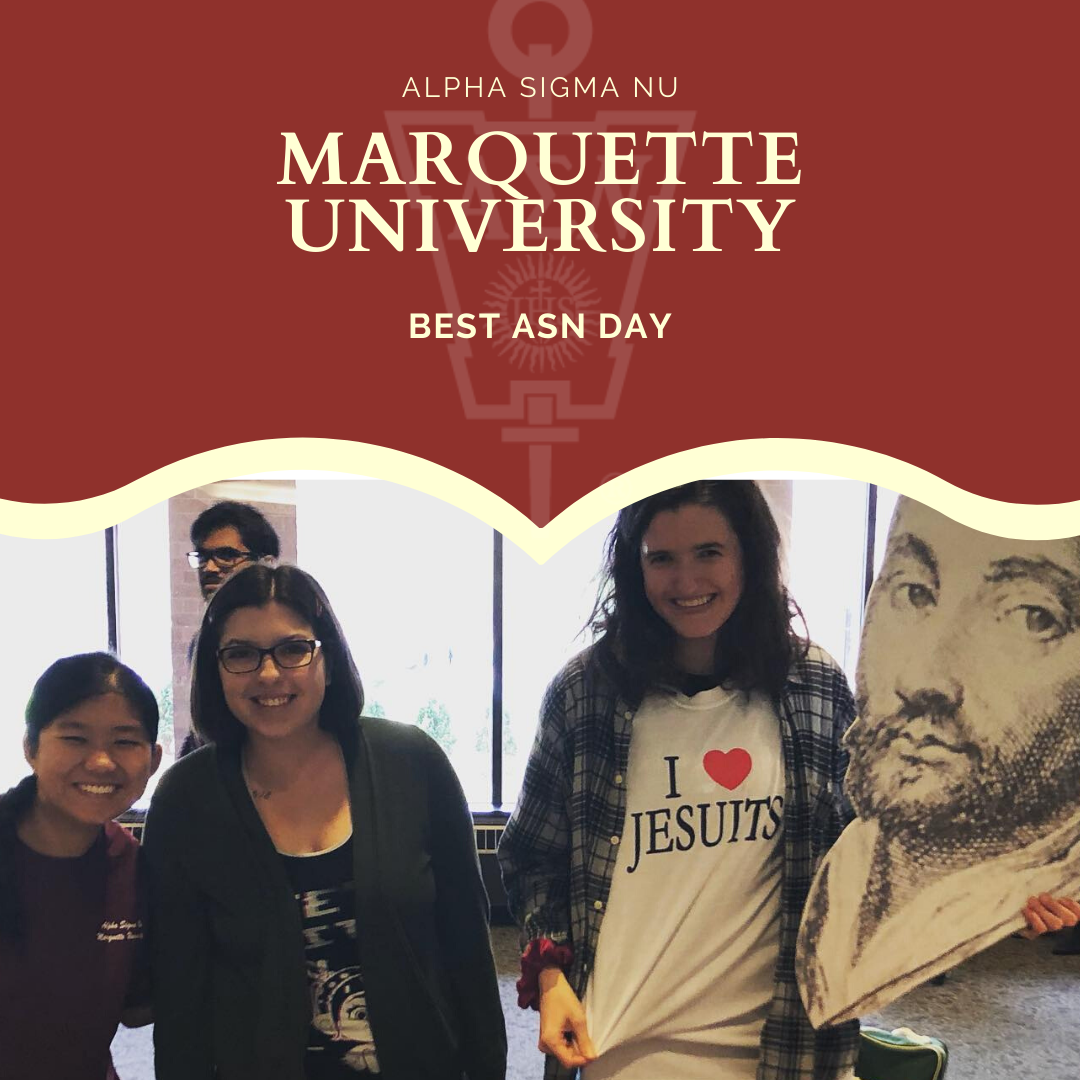 We congratulate Marquette University on winning the award for Best Alpha Sigma Nu Day. In our first-ever cross campus celebration of ASN Day on October 17th of last year, we sent each chapter a package of supplies, including the Big Head of St. Ignatius, and asked chapters to hold campus events and be active in the social media campaign to find our #iggyinspiration. The individual chapters took it from there and created their own events. Marquette University wins this year's award for Best ASN Day for hosting a tabling event in a high traffic area that had food and swag giveaways, a trivia game about the Jesuit honor society, upper administration and Jesuit attendees, and selfies with St. Ignatius. The event was publicized through campus news channels, chapter social media, and was even covered by the Marquette Wire, a student publication. Marquette's ASN Day was well-attended, informative, and fun. It certainly raised awareness of Alpha Sigma Nu on campus! The Board judging committee was also impressed by chapter President Vlada Snyder (Marquette `19), Adviser Ryan Duns, S.J. (Canisius `01) and other chapter members' willingness and enthusiasm to allow video of their event for our new ASN video (see debut later in this e-newsletter). 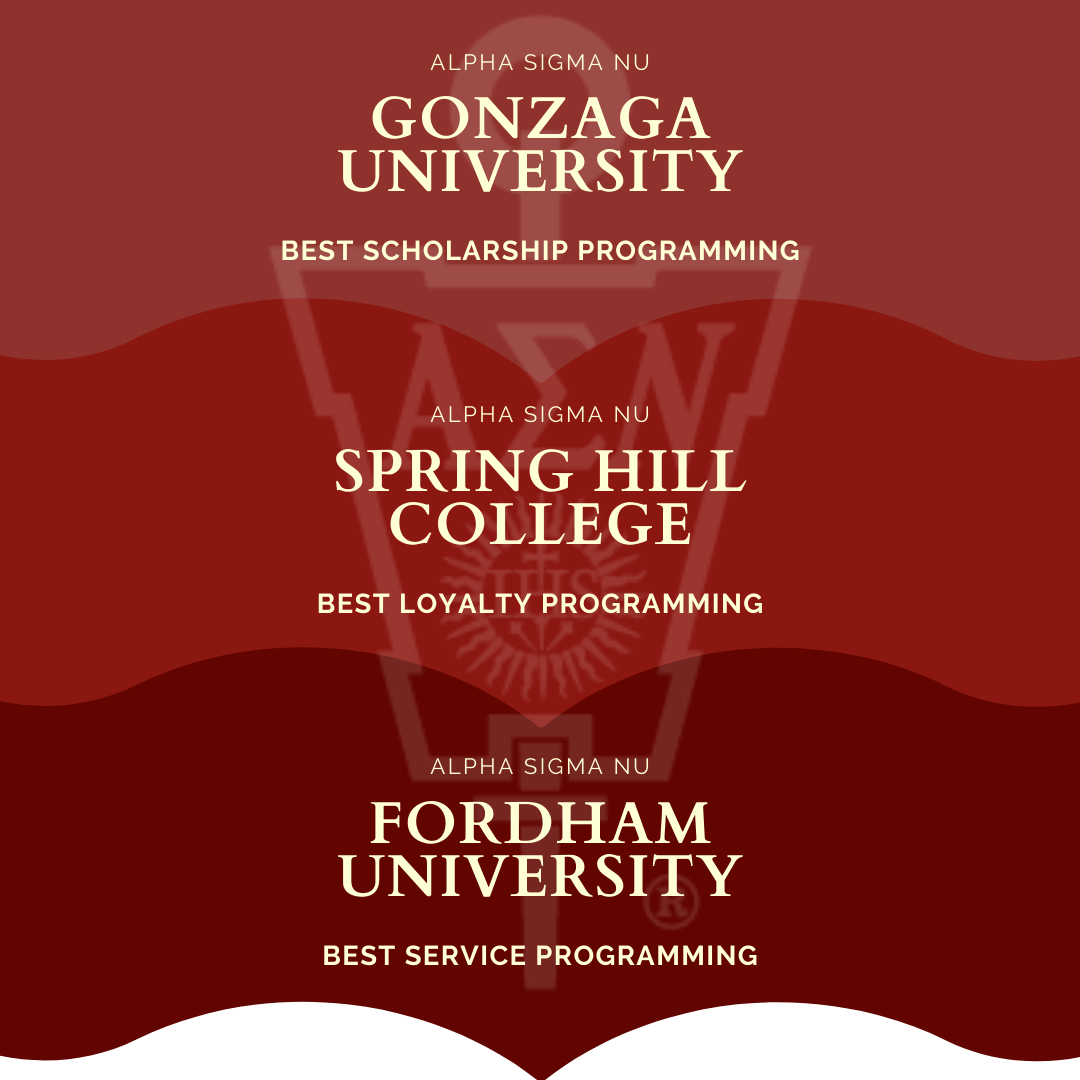 This award goes to Gonzaga University for their consistent excellence in educational programming, particularly their scholarly talks. This year, the programs that stood out to the Board judges were the idea for a lecture by Kizito Kiyimba, S.J., an African Jesuit from Arrupe Jesuit University in Zimbabwe and their partnership with Mission and Ministry on a Church in the 21st Century series this spring. The chapter also hosts an annual Last Lecture event with Gonzaga faculty members. Though the events had to be canceled due to the pandemic, chapter President Jacey Schweitzer (Gonzaga '19), Adviser Dan Bradley, Ph.D. (Gonzaga `13) and the other chapter members had great enthusiasm for the speakers and plan to carry out this programming next year.

BEST LOYALTY PROGRAMMING
This award goes to Spring Hill College for leading the way in loyalty to the Jesuit ideals. This chapter has a long tradition of events and traditions that inspire loyalty to Jesuit ideals as well as growing the Ignatian spirituality of its members. The Board judges were especially impressed with the Induction Retreat held by the Spring Hill chapter before each induction ceremony. The retreat is required for all new inductees and is held immediately prior to the induction ceremony. During the retreat, chapter members have a chance to reflect on what Jesuit education means to them, what their core values are, and how their own values and those of their education will guide them after graduation. They hear from alumni members about their experiences living out the values. The retreat also includes a segment about service and a video by Gregory Boyle, S.J. (Loyola Marymount `90), founder of Homeboy Industries. This event lays a strong foundation for chapters members to be active, invested ASN members on campus and beyond. The template for this event inspired many ASN chapters to create their own chapter retreats. Thank you to chapter President Maria Mengis (Spring Hill '18), adviser Michael Williams, S.J. (Spring Hill `01), and the other chapter members on their commitment to Loyalty.

BEST SERVICE PROGRAMMING
Congratulations to Fordham University for winning the award for Best Service Programming. This category was the most difficult since so many chapters are doing amazing service work, either on their own or in collaboration with other organizations on campus. The Board judging committee, however, could not pass up the Fordham chapter's new shadowing program. Local afterschool program students from Liberty Partnerships Program are matched up with ASN chapter members to shadow a college student at Fordham for a day. The hope is that this experience instills in these kids a real desire to go to college - hopefully Fordham, or another Jesuit school! This program could be a great model/spark for an eventual wider collaboration with Cristo Rey schools. The Fordham chapter has a long-standing tradition of excellence in service aided by the wonderful chapter management of chapter President Daniel Groff (Forhdam `19) and Adviser Michael Trerotola (Fordham `16), along with the other chapter e-board members. We thank Fordham for sharing their chapter management wisdom with the community of ASN chapter presidents.