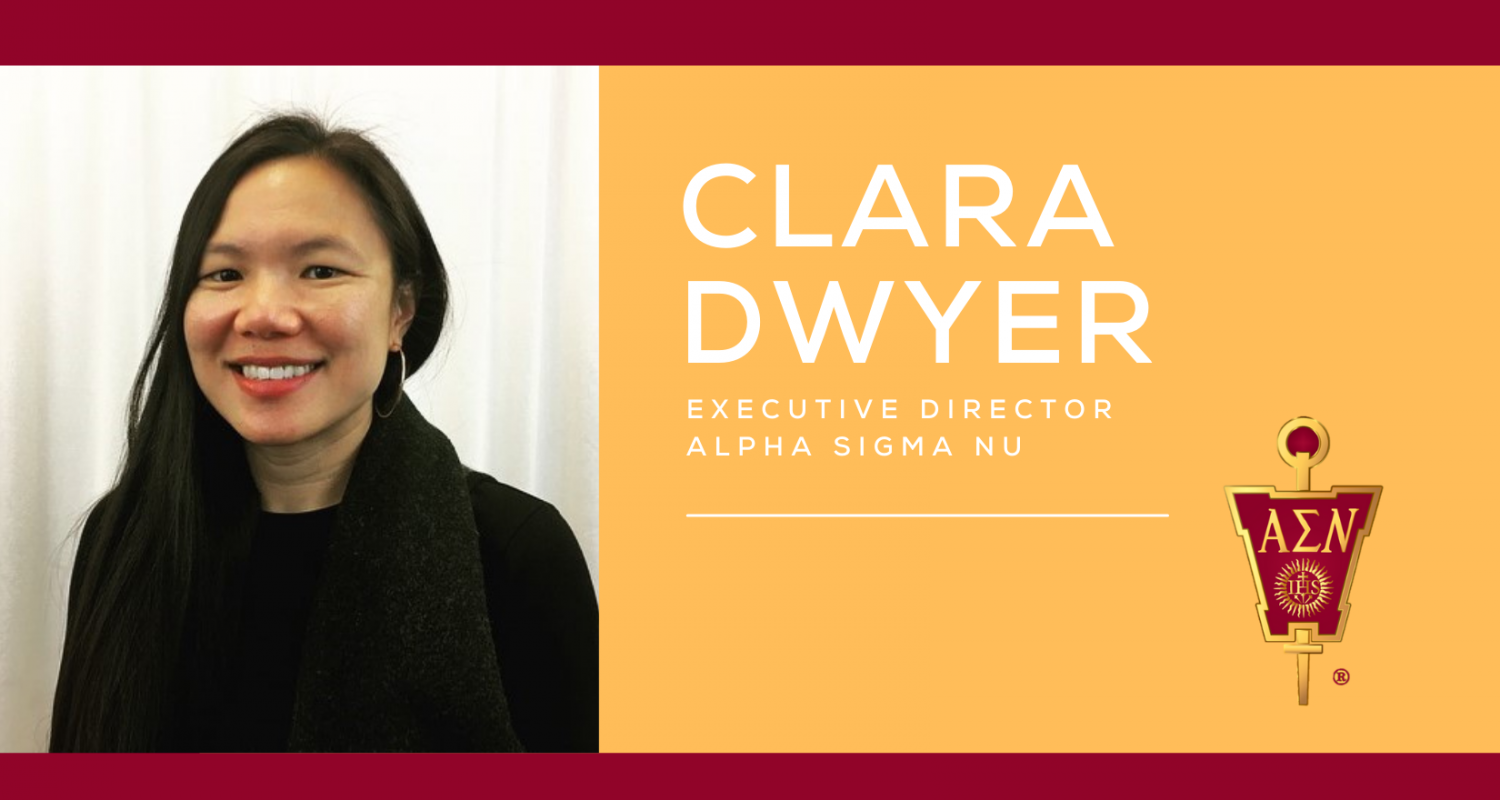 We are pleased to announce the new Alpha Sigma Nu Executive Director, Clara Dwyer, M.Ed. She will join ASN on July 11, 2022.

Ms. Dwyer was appointed by the ASN Board of Directors following a nationwide search led by ASN Board Vice-President Penny Menge. ASN Board President Sean Michaelson, S.J., Executive Secretary/Socius for the Jesuit Conference of Canada and the United States said, “We are thrilled that Clara Dwyer comes to this new position as a member of ASN. Clara knows our mission and is deeply committed to it, but she also sees how we can better express and live out our mission in the context of the world today. She brings to this position both a strategic vision for ASN and a wealth of student-focused experience. We are excited about our future and look forward to working with Clara in the years to come.”

Ms. Dwyer has worked in Jesuit education for over a decade most recently served as Assistant Director at the Center for Engagement and Inclusion at Marquette University, where she developed programs focused on increasing first generation student retention and success, led the University’s multicultural pre-orientation program, and collaborated with institutional partners in developing programming and support guided by the Jesuit mission and identity. She implemented trainings to increase student leadership and cultural competency skills, served as a resource for underrepresented students, and collaborated with Undergraduate Admissions and University Orientation teams to set up early interventions for student engagement.

In addition, Ms. Dwyer has served Marquette University as Facilitator for the Asian Pacific Islander and Desi American Community Circle for Students and was integral in earning Marquette the NASPA First Gen Forward and First Scholars institutional recognition.

Ms. Dwyer previously served as Assistant Director of Development and Volunteer Coordinator at Chicago Jesuit Academy, where she honed many skills that will serve her as Executive Director including communications and marketing, fundraising, and volunteer management.

Ms. Dwyer earned her bachelor's degree from Santa Clara University, her master’s degree in education from Northwestern University, and is currently pursuing a Ph.D. in Educational Policy and Leadership at Marquette University.

Ms. Dwyer was inducted into Alpha Sigma Nu in 2019 at Marquette University while serving as chapter coordinator. She welcomes the opportunity to join ASN and serve as its next Executive Director. She said, “I am honored to serve as the next Executive Director of ASN and am eagerly anticipating the opportunity to work with the members of the ASN community who share in the commitment to uphold the tenets of loyalty, scholarship, and service. I would like to express heartfelt gratitude to Kate Gaertner for her dedication and look forward to working with the Board of Directors and staff to promote the mission of ASN and Jesuit education.”

Ms. Dwyer succeeds Ms. Gaertner, who served ASN from 2002 until her recent retirement. She said, “I congratulate Clara Dwyer on her appointment as ASN Executive Director. I believe she is the perfect person to lead the Jesuit honor society at this time. What a great honor and blessing it has been to lead ASN, to contribute to the mission, and to work alongside a committed, creative staff, dedicated advisers, wonderful Ignatian and Jesuit colleagues, and inspiring student leaders. I have every confidence that Clara will not only feel similarly blessed, but that she will take ASN to the next level.”