The Chapter of the Year is… 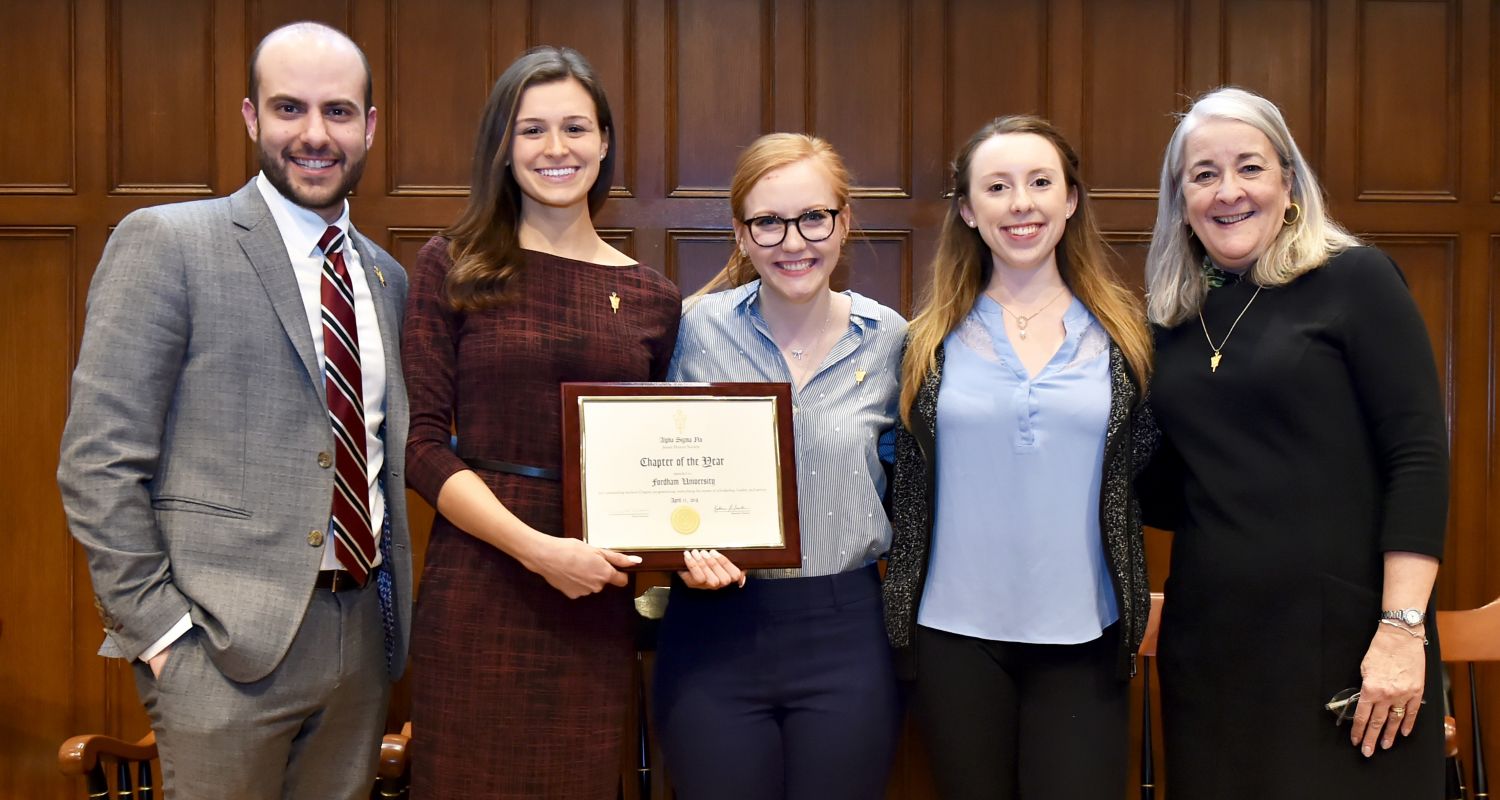 We are pleased to congratulate our 2019 Chapter of the Year -- FORDHAM UNIVERSITY!

Fordham's chapter is consistently outstanding, however, this year Chapter President Morgan Menzzasalma, along with executive board members Brighid Morgan, Andrew Hof, Kaetlyn Conner, and Adviser Michael Trerotola organized and executed an ambitious and innovative calendar of programs.  The selection committee for Chapter of the Year was particularly impressed by the way Morgan and the team shared lessons and energy from the Triennial Conference with the wider chapter membership.  Starting with information sessions and weaving into programs throughout the year, Morgan emphasized what makes ASN unique among honor societies, shared how to connect with the worldwide alumni network, incorporated reflection into each chapter program, and chose program topics that highlighted themes from the Triennial speeches, such as discernment.  On top of the 17 service projects that ranged from homeless outreach, to blood drives, to early literacy advocacy, the chapter also held numerous events to connect directly to the Jesuit community.  Chapter members visited with retired Jesuits, had dinner with scholastics, put on Jesuits on Tap events to discuss important topics with Jesuit scholastics in a casual setting, and once again hosted Father McShane's Bucket List, an exclusive program for ASN members with the university president to discuss what they should put on their 'to do' list before graduating from Fordham.  Some other new opportunties this year included the Executive Leadership Series, where ASN members had an exclusive invitation to attend a networking event with Fordham's influential alumni, and Jesuit trivia with the Manresa Scholars program to let high achieving freshman interested in the Jesuit mission know about ASN and our mission.  To cap off the student chapter experience, the chapter will once again host the Senior Toast, an event for graduating seniors to reflect on their time at Fordham, get resources for staying connected to their Jesuit roots, and be inspired by remarks from University President Father McShane.

We continue to be impressed by the activity of the chapter and the hard work they put in to ensure members have a meaningful student chapter experience.  Morgan, Mike, and the team certainly captured the energy of the Triennial Conference in their programming and proved themselves to be this year's Chapter of the Year.

This year, the selection committee named FAIRFIELD UNIVERSITY as honorable mention in the Chapter of the Year competition.  Fairfield's chapter, lead by Chapter President Anna Kamradt, executive board members Sean Tomlinson, Lauren Hart, and Paulina Baclawska, and Adviser Jocelyn Boryczka, decided to turn things around for Fairfield's chapter and increase awareness of Alpha Sigma Nu on campus.  They partnered with Fairfield @ Night to put on Bingo nights with Jesuit trivia to reach younger students and inform them about ASN.  They also started some new traditions, brunch with the Jesuits and the Custodial Worker Appreciation Banquet to express gratitude to the staff who keep Fairfield running.  On top of an active year of programming, the team also made brainstorming new programs and drafting official bylaws a priority to set the chapter up for continued success.  The energy this team put into rebuilding the ASN tradition at Fairfield makes them very deserving of recognition.  Congratulations, Fairfield!